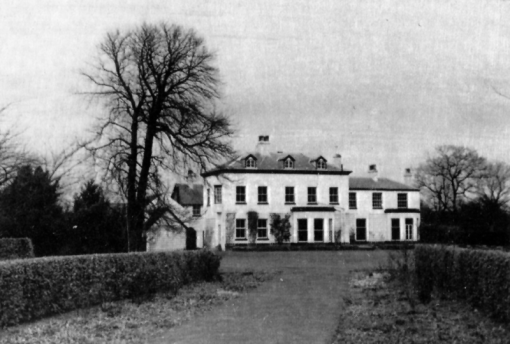 Claxton Hall is set away from the main village on the north side of the A64. The design suggests an early 18th century house, stuccoed and altered in the early 19th century.

A history of York published in 1859 states that "Claxton Hall since 1851 has been a private lunatic asylum under the proprietorship of Mr John Jackson.  The house is licensed for 26 patients".

In 1872 it is described as the seat of Frederick James Walker the second son of James Walker who had moved to Sand Hutton Hall in about 1840.

Following the first World War the Hall was occupied by Sir Archibald and Lady White after which it was regularly occupied by Army officers as a hiring - initially from the Walker family and then from around 1936 the Church Commissioners.

In 1938 General Sir William Bartholomew was seeking a house superior to the one he was occupying - Government House in Clifton - and Claxton Hall was purchased for £ 3,000 including 36 acres. A considerable sum was spent on renovation - including a "black bath" which Lady Bartholomew insisted on having installed. Water for the house came from a reservoir north of Claxton and was driven by a windmill.

In 1943 the Hall was an overflow for York Military Hospital and remained as such until 1947 when it reverted to being the Army Commanders residence.

In 1985  Newitts  a well known York sports shop moved their Headquarters to Claxton Hall and built large  Warehouses around it, 60,000 square feet in all.

Date of writing 2000. Whilst they have now sold their shop in York, Newitts are the largest mail order supplier of sports equipment in the UK, employing 35 people.

Newitts is a family firm currently controlled by the fifth generation, which
was founded in 1902 with no outside shareholders.

The business began as a small leather shop in the centre of York and between
the wars, diversified to selling leather and other sports equipment. In 1985 the company moved just outside of York to Claxton Hall, a green field site where our corporate headquarters and a 60,000 sq. ft warehouse were built.

This together with ample delivery and parking space has enabled the company
to continue to grow and respond quickly and effectively to all orders.

Newitts are a UK based mail order supplier of sports equipment, employing 30
people; the company has a policy of holding large stocks, ships an average
of 400 orders daily and achieves a picking level of 98% on orders placed.

Quality, service and competitive prices are their main concern, add to this a
quick delivery service and you will find that Newitts service is hard to beat.