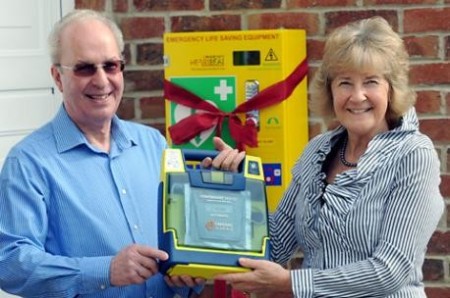 A PAIR of neighbouring North Yorkshire villages now have access to life-saving medical equipment thanks to a huge fundraising campaign by a community-minded husband and wife.

Liz and Bill Heath were concerned that Claxton and Sand Hutton, on the outskirts of York and sited either side of the A64, were on the edge of the eight-minute 999 emergency response time – the national standard ambulances are supposed to meet when responding to an emergency.

The couple set out to educate the community in first aid and provide each village with a defibrillator.

Mr and Mrs Heath saw their hard work rewarded yesterday with the unveiling of the defibrillators at a ceremony in their home village of Claxton, after raising more than £5,000.

Mrs Heath said: “After reading an article about defibrillators, we carefully researched the possibility of either joining a First Responder Team or installing a defibrillator unit in each of the villages.

“This resulted in an initial Take A Deep Breath community event given by Neil Marsay, from the Yorkshire Ambulance Service, followed by first-aid courses which incorporated giving help and getting help in a medical emergency.”

The couple also embarked on a huge leaflet campaign around the area which saw donations rolling in from fellow villagers, North Yorkshire County Council and other organisations and businesses.

The final sum raised was £5,203, exceeding the amount required with the balance safeguarded to cover any maintenance requirements over the next seven years.

The units will now be installed at the couple’s home at Lawnswood in Claxton, and the second near Whey Carr Farm.

An instructional leaflet will also be sent out to every house in the two villages along with outlying homes and businesses, said Mrs Heath. 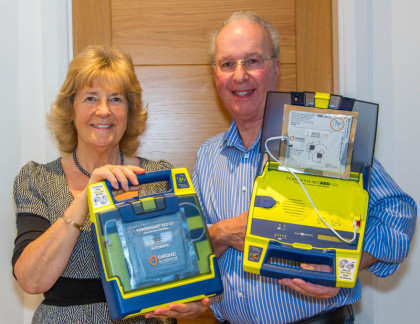 Photo showing the units closed and open ready for use.