After reading an article about Defibrillators  in the Gazette & Herald, Liz and Bill Heath carefully researched the possibility of either joining a "First Responder Team" or installing a Defibrillator unit in each of the villages.

As the two villages are situated on the edge of the 8 minute reach time for an ambulance and on the wrong side of the A64 especially at busy times, they decided to take a pro-active response. 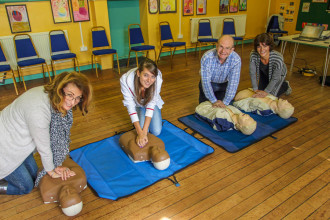 This resulted in an initial "Take A Deep Breath" Community Event given by Neil Marsay from the Yorkshire Ambulance Service, followed by First Aid Courses which incorporated Giving Help and Getting Help in a Medical Emergency.  Over 80 villagers were made more aware of how they could make a positive difference in an emergency.

The decision was then taken to instal a Defibrillator Unit in each village with access 24/7/365 stored in a high-visibility weatherproof cabinet which can only be opened by access code which is given out by the emergency services via a 999 call.  Positioned in easily accessible locations with adequate signage and each household in the villages given clearly written Instructions.

The Community Heartbeat Trust provided literature and lots of help and guidance and in June 2012 Liz and Bill initiated the Defibrillator Appeal to raise the required funds.  Leafleting every household and writing numerous letters to businesses and charities soon resulted in donations being received, initially from villagers and then NYCC, York Lions Club, Parish Council, Rose Trading, Therapy in Praxis, York Round Table, Strensall & District Patients Fund, surplus money from the discontinued crime watch in Claxton & Sand Hutton, the appeal continued and the support that was received was so rewarding.

All the money donated has been "ring fenced" in our Parish Council Accounts and the sum of £5,203 was raised, although this exceeds the amount required, the balance will remain in this account for any maintenance requirements over the next seven years.

People can still donate towards the ongoing running costs.   Thank you.

The money (£200) kindly given to Liz & Bill for winning the Minster FM "Local Hero Award" "Make a Community Difference Award" was put into the fund which allowed them to go ahead and make the purchase.

The Defibrillators purchased were the fully automatic type taking the fear and risk element out of using the equipment in an emergency situation. Once in use by opening the lid on the Defibrillator it gives you audible and visual instructions (for the hard of hearing) taking you through the process of what to do as you are waiting for the ambulance to arrive.

On March 20th, two defibrillators were delivered, a 2 hour training session was given by Martin Fagan from the Community Heartbeat Trust, and 32 people attended in the village hall.

Choosing where the defibrillators were to be positioned was carefully thought about as they needed to be easily accessed and to have a power supply which keeps the cabinets warm in cold weather, the defibrillators themselves do not need recharging as they have a 5 to 7 year life.

Whey Carr Farm, next to the telephone box.﻿

Claxton: positioned on the garage wall

Clear signs have been placed at each point. The electricity used to keep these two units at working temperature will be met by John & Caroline Goodrick and Bill & Liz Heath.
﻿ 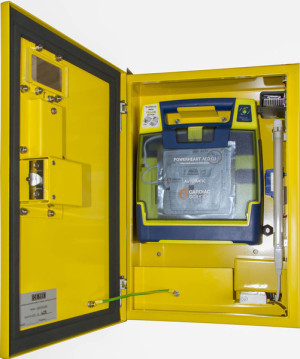 An instructional leaflet will be sent out to every house in the two villages along with outlying houses and businesses.

We are pleased to have been able to raise the money and organise the purchase, training and positioning of these two life saving pieces of equipment in our two villages.
﻿

We are very grateful to all the people who have helped
and donated allowing us to have these installed.

At the end of the day we hope they are never used.﻿