Synolda Returns For Her 100th Birthday 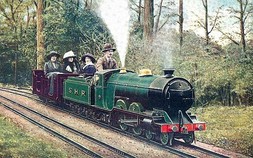 Sir Robert at the controls of "Synolda" His wife Synolda is the Lady in the centre.

Heritage Group Claxton & Sand Hutton have worked hard to have Synolda pay a visit to Sand Hutton on route from its current home at Ravenglass & Eskdale Railway in Cumbria to the National Railway Museum in York﻿.
It was touch and go as to its arrival but we won through at the end of the day and it turned up outside the Sand Hutton Primary School at 9.30am on Tuesday 29th May.
It was a most welcome sight to all the locals as we have many old pictures, books etc. but most people have not seen this little wonder, Synolda.
It was soon unleashed and promptly craned over the school fence landing on a section of 15" railway track on the school playground.
Sir Robert Walker purchased the newly built steam locomotive in 1912 from Bassett-Lowke of Northampton and named it 'Synolda' after his first wife. When the Sand Hutton Miniature Railway was first built, over 300m of track were laid in the grounds of Sand Hutton Hall, later to be extended to 1,140m by the end of 1913.
Because of the First World War things slipped at the Hall with many men joining the forces to fight in the war. After the war, Sir Robert Walker re-opened the line and set in motion plans to extend and connect the railway with the North Eastern Railway station so that the longer line could serve as the main transportation system for the estate.
After the Sand Hutton Railway's gauge was changed in 1922, the locomotive was sold to a pleasure park at Southend and then transferred to Manchester, and during the 1960s, it had Wild West Fittings. When the zoo closed in 1978, it was rescued by the Ratty and restored to working condition by apprentices from BNFL. It is mainly used at gala events and on special train days and normally lives in the museum building.﻿
.
It was a most welcome sight in Sand Hutton. . . . . . . . .