Excerpt taken from J. H. Foster of Claxton, written in 1934.

on the historty of St. Mary’s Church, Sand Hutton. 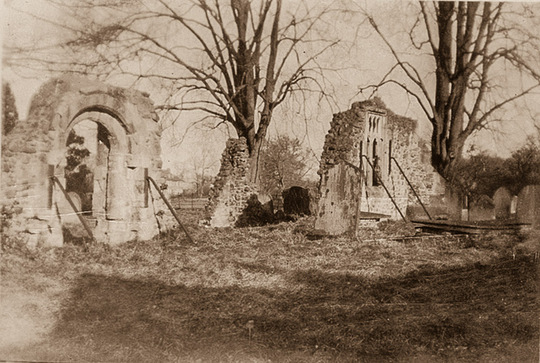 A view probably taken in the winter of 1933 of the ruins, which gives some idea of the dimensions of the original Chapel. Notice also the supports which are necessary to keep up the ruins, these are still supporting it today.

Right down the ages the Church has played an important part in our national history, and so, in the villages has it played a part in the building of rural life. So the history of any village, should perhaps, start with its Church.

To the east of the present Church of St. Mary's, stand the ruins of (as far as we know at present) Sand Hutton's first Church, though strictly this should be called a Chapel-of-Ease, as Bossall was the Mother Church until 1861.

The Norman doorway of the ruin, has been dated by experts as circa 1150-60.

Now the original Norman Church at Bossall was built about the years 1180-85, and this makes the Mother Church of Bossall younger than the Chapel-of-Ease at Sand Hutton - which is a very unusual thing as naturally it should be the other way about.

The original Norman windows, which at their best are only apologies, would make a building of such small dimensions very gloomy and this accounts for the larger perpendicular window in the South wall.

There are absolutely no traces of the other windows left, but no doubt the Norman windows would be pulled out and others giving more light substituted — though nothing can be proved.

History is very obscure on the subject of this Chapel-of-Ease although it is recorded there was a Chapel of St. Leonard before 1351 for preaching and catechising, no mention at all can be found in the next four hundred years.

There appears to have been a difference of opinion on the question of whether St. Mary or St. Leonard was the patron Saint. To-day St. Mary is universally acknowledged as the correct dedication, but anyone looking at the present east window in the Chancel of the present Church will notice that both St. Mary and St. Leonard's are portrayed side by side in the stained glass.

On the West side of the Norman doorway are mass dials cut into the stonework, but at the time of writing (1933) these are getting rather worn.

Under the perpendicular window is an aumbry where the Communion Plate would no doubt be kept. The old font which stands in its original place, and is little worse for wear is made of very hard stone, and it is quite likely that it was used as a millstone for grinding purposes before serving as a font.

Services were held at St Leonard's every third Sunday and Holy Communion was celebrated three times a year on Good Friday, on the second Sunday of Mother Church (presumably second Sunday in Advent) and on St. John's day.

The average number of communicants about 150 years ago was about 20. There was one bell attached to the Chapel.

In 1824 the Chapel of St. Leonard was beyond repair. “The walls very damp in consequence of the Body of the Church being much below the surface of the Churchyard”. 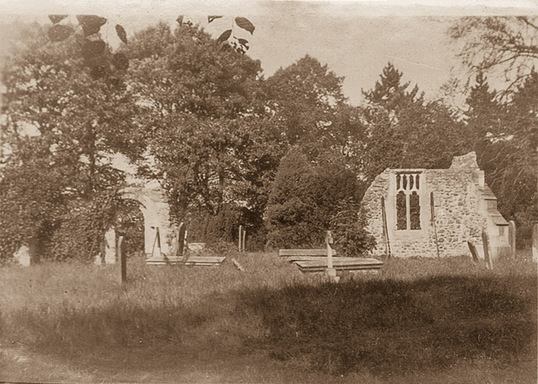 A general view in summertime (probably 1933) of the ruins of St. Leonard’s Chapel-at-Ease, Sand Hutton, showing the Norman doorway and Perpendicular window. The photograph was taken from the South.

Why so little remains of the walls is due to the fact that "leave was granted to build a new Church and permission was given to use the stones from the old Chapel in the rebuilding of the new Church”.

It is doubtful if we shall ever know what this Norman Chapel was like as there appears to be no drawing of it in existence and its original shape will be only a matter of conjecture.

Near where the Altar stood lies buried a former Lord Mayor of York, Alderman Read, and it seems more than likely that he was buried in the Church before it was half pulled down. His epitaph which is now almost obliterated is (or was) as follows:

Here rests in hopes of a blessed resurrection the remains of John Read Esq. for many years in commission of peace for the North Riding of York and Lord Mayor of the City of York in the years 1719 and in 1746. He was strictly attached to the Protestant religion always endeavoured to promote true interest in his country in private life generous with profusion a cheerful companion a sincere friend in short he was, either in public or private capacity. He enjoyed a series of good health through temperance and sobriety till within the last seven years of his life but then nature not being able to perform her proper functions he was attacked with the stone and stranguray which he bore with uncommon patience and resignation and at the last on the 30th day of June 1754 and in the 80th year of his age he calmly met death without fear or amazement.

That is about all there is known about this small Chapel at the present, perhaps further secrets will come to light in the future.