Children are encouraged to make a Royal hat

Guess who the baby picture is today

Guess how many lollies in the jar

Guess whats in the boxes

Who can draw the short straw

3.30pm:  Results of the competitions

Childrens reminder: Dont forget to take your camera and take the "Royal photographs which will be judge at the village hall on Saturday 4th June: 11am till noon. More information on this later.

Rachel kindly donated all the bunting, flags, cups, plates, tablecloths, knapkins etc. for the event and even let us tap into her electricity supply for the teas and coffees. 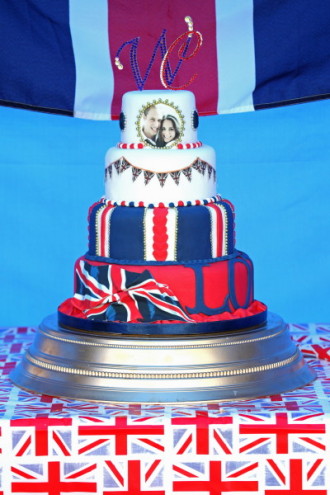 from Claxton Hall supplied a superb "Themed Three Tiered Wedding Cake" which was the centrepiece in the food marquee.

Along with the cake Gaynor prepared a red, white and blue cake which was cut up and distributed to all.

which made it a successful and enjoyable day for all.

A Good Time Was Had By All

Claxton & Sand Hutton combined on the Royal Wedding Day on Claxton Village Green to celebrate the occasion, it was a very enjoyable afternoon with well over 100 people attending.

The weather was very kind to us and apart from one shower in the morning which came down whilst everyone was watching the television, the weather did not effect us.

Chris and Mike prepared some mystery boxes which were an instant hit with the children, from feel-like rats to squishy jelly made the children squeal with horror as they were blind-folded and dipped their hands inside the boxes... they loved it.

Laura organised a face painting station and after the artwork was complete, the children were walking around with very artistic faces.

There was a box of dressing up gear from Fiona which added to the fun of the afternoon. There was alot of strange headgear going on which led to some great photo opportunities for children and adults alike.

The children were snapping away trying to get a winning shot for the Royal Wedding photographic competition, they were even after my patriotic red white and blue flagged socks!!

There was also name the royal teddy, (Fergus was the winning name) and Daisy went home very happy clutching her new friend.  How many lollies in the jar was won by Lucy who guessed 81, she shared them with her friends.  Drawing the short straw was fun with a prize for all.

The prize for the best royal headgear was won by Esther who won a book and a tiara.  Chris won the best red, white and blue outfit, a lot of effort had been sewn and she even had a matching walking stick! She won a right royal cushion.

Match the name with the baby and adult, brought in hilarious results, and there were several winners, must make this harder next time!

A great opportunity to celebrate the occasion with friends and neighbours for a couple of hours, with lots of chatter and laughter.

Pictures of the day

We trust you enjoyed the pictures, if you would like a different caption or even to be removed please let me know.