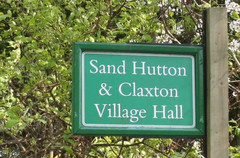 The Sand Hutton, Claxton & District Produce Show 2012 attracted many exhibitors with a fantastic array of entries.

Despite the poor weather and fears that the flower entries would be down, we were delighted with the arrangements and specimens brought on the day.

Wow, did you see those dahlias and Hydrangea flowers? The foliage arrangements were inspired and the miniatures almost invisible they were so small but perfectly formed!.

The vegetable and fruit entries were down on previous years but the quality of the entries was as high as ever. Issa’s garlic bulbs were eye wateringly huge and Tims berries so temptingly juicy that I’m surprised they were still all on the plate by auction time. The tables of baking were groaning with the weight of entries including, bread, cakes, puds, eggs, preserves and the number of entries in the home made drinks class was definitely up on last year. Obviously people are keen on experimenting with alcohol.

Entries in the handicrafts section was also up on 2011, with some amazing creations done with such skill and dexterity. Unlike my own entry of a cardboard arm sporting a choclate wrapper bangle! My Mother despaired of my ability to knit, crochet or sew.

We have some very talented children in the area as evidenced by the wonderful, models, paintings, baking and flowers entered. We’d love to see more childrens entries in the next show. I also hope you saw the display of work entered by the children of Sand Hutton School in the classes for designing a new chocolate bar or advertising an existing sweet. Their work will be left on display in the village hall for some weeks yet so do take the opportunity to have a look whenever you can.

Surprisingly the entries for photographs was low compared to previous years. Where were all you budding photographers? Everyone enjoys seeing other people photos, and the class for humorous ones produced some very amusing entries. So come on you shutterbugs don’t be shy next time.

The theme for this years show was ‘Chocolate’ and visitors enjoyed themselves trying out several different types of chocolate, then voting for their favourite. Fruit kebabs were also available for dipping in the chocolate fountain. Then if you weren’t tired of chocolate by auction time, you could vote for one of many chocolate cakes that had been entered in various classes.﻿

The show entries, raffle, auction, sale of refreshments and donations totalled nearly £500 with about £100 of expenses to be deducted. The amount raised will go towards the upkeep of the Village Hall.

On behalf of the Village Show Committee, I’d like to thank all the people who gave their time so willingly to help out on the day. And finally, thank you all for entering and/or visiting the show. Without you there would be no show.﻿